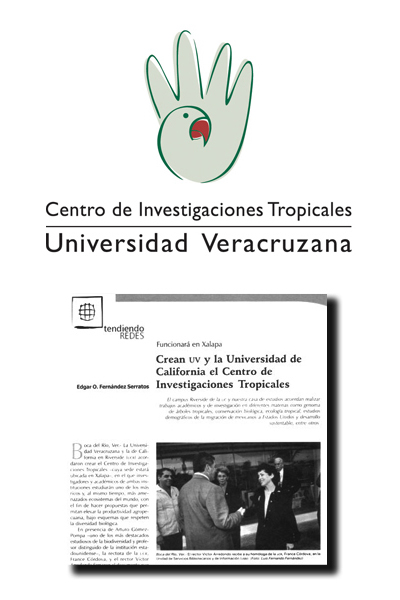 In the year of 2004, from the collaboration between the University of Veracruz and the University of California-Riverside (UCR) promoted by PhD. Arturo Gómez Pompa and PhD. Ernesto Rodríguez Luna, was created the project for the Tropical Research Center (CITRO), whose objectives were to provide the theoretical and practical elements for the management and conservation of tropical ecosystems, creating a multidisciplinary space in which academics from both institutions could study the most diverse, and at the same time most threatened, ecosystems of the world.

On August 15, 2007, it acquires its character as an institutional unit. The rector in turn, PhD. Víctor A. Arredondo Álvarez, said that this center was born to attract the efforts of those who bet on the strengthening of sustainable development not only in Veracruz but in any of the tropical regions of the country and the world. In this way, CITRO emerged as an academic structure with the potential to generate research centers scattered throughout the state, and with the possibility of becoming one of the strong arms of the University in terms of consolidating its links with the different sectors of the regional, national and international population.

Currently, the work of the Tropical Research Center has been expanded to respond to current contexts: globalization, population movements, climate change, increased interactions between rural and urban areas and their transitions. We stand from a socio-ecological approach, especially considering and valuing the biocultural richness of the tropics and the urgent need to contribute with knowledge, practices and initiatives that benefit the populations and resources of this region.

The Tropical Research Center is located at José María Morelos Street No. 44, in the City Center of Xalapa, Veracruz, and has an Orquidary located on the Campus for Arts, Culture and Sport, also in Xalapa, Veracruz. The CITRO has a staff of 14 researchers, 4 academic technicians and 11 professionals responsible for administration and maintenance. In January 2008, the Postgraduate Program in Tropical Ecology was inaugurated. Since its inception, the Master belongs to the belongs to the Register of the National Program of Quality Postgraduates (PNPC) of the National Council of Science and Technology (CONACyT).